I am a Soccer Mom; I Have Arrived

I am not an athlete, nor have I ever been one.  I got in shape once to see if I could do it.  My parents were more athletic than their children.  My dad got a scholarship to the U.W. for track and field, and played racquetball and swam his whole life.  My parents also “jogged.”  Remember jogging?  That’s what “the Greatest Generation” did.  They jogged.  They were humble about it; they jogged without fanfare, without fancy shoes and usually in a grey sweatshirt.  “Liz, your mom and I are going for a jog.”  They would go for 2 miles and were back in half an hour. Gen Xer’s don’t jog.  They run.  They go out for runs, in spite of the fact it may take them 30 minutes to move their bodies one mile.  And they make a big deal about it.  “What did you do this morning?”  “Went for a run…then got an iced coffee.”  God, we’re arrogant.

So yeah, I wasn’t athletic.  I was more into music and drama.  The whole team sport thing eluded me.  The reason I am explaining my ignorance and bewilderment with team sports is because I am now caught smack dab in the middle of it.  Much to my shock and dismay, I have become a soccer mom.

Our daughter Emily started soccer when she was 5.  I don’t know what led me to sign her up.  I guess I thought it would be cute.  And it was!  Those little post-toddlers chasing a tiny soccer ball, trying not to use their hands, drawing in the dirt, picking dandelions, now that was my kind of sport! 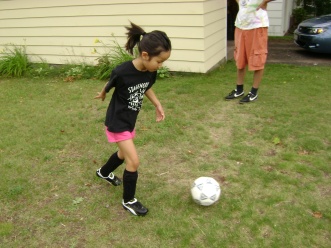 Then there was this phenomenon called “British Soccer Camp.”  These adorable and charming boys from England come over during the summer and coach soccer camps for kids.  I swear to God, the first year I did it because I am such an anglophile, I figured it would be cool to hear their accents.  And it was!  They played silly games with the kids, and worked on foot control, etc. etc. fish and chips, bloody hell, bangers and mash and all that lot.

Now, Emily loves soccer.  A lot.  She plays offense and is usually the top goal scorer of the game.  Her foot skills are quite good.  And this isn’t just her mom talking either.  She’s currently being scouted by Manchester United.  (Just the fact I can make that joke makes me cringe.  I should be listening to show tunes, not wasting time knowing who Mia Hamm is.  Honestly, David Beckham should only be Posh’s husband in my world.  Period.  Look what I have become!)

My daughter plays for the Bayfield U-10 girl’s soccer team.  Let me fill you in on Bayfield soccer.  We don’t have uniforms, we don’t have matching socks, we don’t have bleachers or clubs or anything like that.  We sometimes have grass on the field.  We’re scrappy.  If we’re lucky, our kids play in matching t-shirts.  The coach hopes they show up in black shorts and not jean cut-offs.  Bayfield is a town of little over 300 people.  Some of the girls on the team are from Red Cliff Indian Reservation just outside of town, but even so, it’s a small team.  Really small.  We’re lucky if we play a game with a sub, let alone two.  When we play a team from Ashland, it feels a bit like David and Goliath.   Ashland has uniforms, bleachers, larger teams, grass fields, parent booster clubs and even a traveling team – for U-10 girls.  I am completely serious.

Here’s why this is important.  Currently, Bayfield’s U-10 girls are undefeated.  Last year, this scrappy, little team from Bayfield didn’t win a game all regular season; it was brutal. But this year, watch out, they are on fire!  Because of this, I have turned into the most obnoxious, loud, insane soccer mom EVER.  Turns out, I love this game.  I am usually hoarse the morning after a game.  I love all the girls on the team!  I know their names and know their positions and I love each and every one of them.  There is Greta, the tiniest girl on the team, and by far the most aggressive.  She got her 2nd bloody nose of the season last night and wore that blood with a big grin.  “Put me in, coach!  I’m fine.”  She said after she got head butted.  I love that kid.  She never gives up.  Then there is Andrea, the tallest 9-year-old on the planet, who never seems to get excited about anything, unless there is a ball coming toward her.  She is so tall, all the opponents are intimidated by her.  It’s awesome.  Then there is Brianne, who can kick that ball farther than any adult I know.  Harley smiles when she runs, it’s absolutely glorious.  I love these girls.  Brianne’s grandma, Greta’s mom and I have gotten shouted down from the parents of other teams; that’s how obnoxious we are.  “Hey ladies, calm down, it’s just a goal!”  I want to smack those parents.  They should be cheering as much for their kids.  I don’t chastise them for not cheering enough.  Live and let live, dude.

Tonight is their last regular season game.   I really hope they win.  (This coming from the girl who feels that football serves as the pre and post-show for the marching band.)  Then there is the “jamboree” on Saturday.  Personally, I think the jamboree should actually be renamed “hell.”  Even insane soccer moms like myself hate the soccer jamboree.  4 to 6 games in a day, every u-15 team in the area swarms to the fields and parking is horrendous.  Oh yeah, it’s also supposed to rain.  The whole day will be filled with waiting, cheering, porta-poties, wet clothes and hot chocolate sans peppermint schnapps.   Wish me luck.  Maybe beforehand, I should get out some of my anxiety, and go for a run.  Go Trollers!

*Sidenote – Yes, Bayfield’s actual mascot is a troller.  Pretty intimidating, right?  A guy, slowly moving his motorboat, waiting to catch a defenseless little fish in an inland lake.  Strikes fear into the hearts of opposing teams.

4 responses to “I am a Soccer Mom; I Have Arrived”