A few days ago, a friend’s Facebook status was about some guy next to her who was doing something called “man-sitting.”  I needed to google it, but once I did, I knew exactly what she was complaining about and why she was complaining.  I would have complained too. If you don’t already know, man-sitting is when men (and I am sure some women, but really, who’s kidding who, mostly men) spread their knees apart and take up more than their own space.  Let me be clear, most men do not do this.  My husband doesn’t do this, my male friends don’t do this and my nephews don’t do this.  However, it still happens to me; it is most visible on planes, in meetings, at movie theaters, and on the bus.  It is beyond rude.  If you are female, I bet it has happened to you in the past few months.   Plainly put, it blows.

What interested me, however, were the responses to her dilemma.  There were 27 comments to her post.  Most of them were from men, who had hilarious and funny responses (“He’s airing out.”  “Is he wearing a kilt?” etc.) and a lot of the responses from women were either commiserate in tone (“I had the same thing happen to me on a plane.”  “That sucks.” etc.) to even a little passive aggressive (“Cross your arms and hold your pen out.”  “Spill your coffee on him…”)

There was one comment however, that for me stuck out.  It was from a mutual friend, Julie, and it made stop and think.  “Give him a bump and say ‘excuse me, you’re in my space.’”  That response was concise, powerful, obvious and personally very, very frightening.  I pride myself in being a strong, independent woman, but chances are, unless I had a few drinks in me, I wouldn’t have said a word.  I would have suffered silently, and after about ten minutes, when I was good and angry, I probably would have done something passive aggressive – like cross my legs quickly, knowing I would “inadvertently” kick him in the shin, and then apologize for it.

Knowing Julie the way I do, I know she would have absolutely followed through with her suggestion without pause.  I mean, it is rather obvious, isn’t it?  Just let him know he is in your space.  It isn’t that hard…so why is it that hard?  Why is it so hard for me to speak up for myself in those types of situations?  Righting a problem should be easier in the moment, than bitching about it afterwards.  Right?  Well, not for me. Julie was always a master of standing up for herself, even to handsome, intimidating, athletic co-eds at frat parties, and she was able to do so in a cheery, smiling manner.  “Hey!  Watch the dancing.  You almost made me spill my drink!” or “You need to stop backing into us.”  I envied that in college and I still do today.  (BTW, there are a lot of female friends in my life who would have responded in the way Julie suggested. I am drawn to these straight-forward, honest, strong women and added bonus, they make great friends.)

Sadly, if I would have had the “balls” to confront a man-sitter verbally, I bet my response would have started with “I’m sorry…” two words I say far too often in my life. I started thinking about women’s role, or more specifically, my role, in this whole “man-sitting” phenomenon.  I started seeing it as a metaphor.  Clearly, there are two roles at play.  There is the rude guy who thinks he is better than the person next to him, ergo he deserves more space, but there is also the gal next to him (me) who allows it.  Why do I allow my space to be taken up by a stranger’s ego?

I don’t think I’m alone, either. We all know it doesn’t just happen on the bus; it happens in boardrooms, in bedrooms, in kitchens, in schools, and on pretty much the rest of the planet.  Just look at the backlash from the “Lean In” movement.  Can you imagine if she would have called it, “Speak Up for Yourself.”  Am I that afraid of being called a bitch?  Or worse yet, being thought of one?

All too often, most men have no problem with being upfront and clear communicators, especially during conflict.   (And yeah, I know how incredibly sexist this blog post is sounding, but honestly, I am speaking from my own life experience.  I am a feminist, married to a feminist, and trying to raise a feminist, and still, I make room in my life for other men’s knees.  I’m not proud of it, and half the time, I don’t even know I am doing it.)  So why can’t I use my voice for my own good?  I use it for other’s good – why not my own?  Why do I feel a surge of fear and anxiety when I need to confront a male about his rude behavior?   Clearly, I have some work to do.

I’m going to try to consciously take a cue from my happy, friendly feminist friend Julie.  The next time I am next to a man-sitter, I am going to smile, tap him on the shoulder, try my hardest not to apologize, and point out he is in my space, even though it will most likely scare the hell out of me to do it.

I was supposed to get up this morning and workout. The alarm didn’t go off. Here’s a newsflash. I wasn’t that upset about it.  I smiled because my “not working out” was completely guilt free.  It wasn’t my fault I got to see the sunshine from my bed rather than stumble around in the dark looking for running shoes. Ha!

I have noticed, in my sort-of-late-40’s, that I have developed something I haven’t had since my sophomore year in college – a gut.  Yeah, I have a gut.  It is no longer a muffin top. It is a loaf of bread – not even like healthy, wheat bread, but more like a big loaf of Wonderbread.  Squishy, doughy Wonderbread.  I had forgotten what that was like, having a gut.  I forgot what it felt like to wear tight pants.  It’s so not cool, especially after a large lunch full of carbs and sauces.

I don’t like having a gut. Seriously, it is starting to bum me out.  Apparently, “couch sitting” doesn’t burn a whole lot of fat.  Neither does trolling on Facebook.  And you know what?  Vodka actually has calories!  More than I was hoping it would.  Turns out pistachio gelato has calories too.  Harrumph.

In college, I drank a lot of beer. Like, a lot of beer –  hence, the gut.  I didn’t like the gut, but apparently, I liked beer more.  After I developed an unwanted allergy to beer (red nose, sneezing, congestion) I lost said gut.  It stayed away for quite a while.  However, now it’s back and I’m not even drinking any beer. So not fair…

When I was in my 20’s and 30’s, I was able to lose weight just by thinking about it. “I need to lose 5 pounds” and a week or two later, I would have lost that weight.  It was as simple as that.  Avoid Dairy Queen or fast food for a week or two and the weight would come off.  I have been trying that method for about a year now, and it hasn’t worked.  Jigs up.

A number of years ago, I worked out religiously. (I know, it was so out of character.)  It was the only time in my life that I was really, truly fit. I was actually sort-of-maybe seeing a 6-pack, or at least the start of one.  This is because I set a goal of doing a Triathlon Sprint. (Don’t let that impress you. It isn’t a “real” triathlon – the sprint part makes it sound peppy and über athletic, but it is kind of the opposite.  It is the training wheels of triathlon.  You swim a ½ a mile, bike 18 and run 2 miles.) 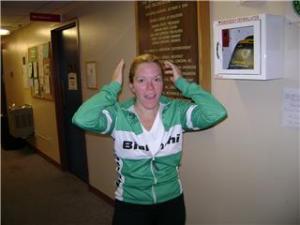 But for me, at the time, it was a big deal.  Training for it was really, really hard, and after I met my goal of completing my sprint in less than 2 hours, I never, ever, ever wanted to do it again. (I can’t believe people do them for fun.  Seriously.)  The only reason I got through it was because I had set the goal.  That was it.  Getting fit was a great by-product, but it wasn’t my main motivator.  The abs were cool, but honestly, I just had to cross the finish line.

Clearly, I’m kind of a goal gal.  I need big goals in my life, otherwise nothing gets accomplished.  Little goals don’t work for me.  I don’t direct cute, little comedies, I tend to go for Shakespeare.  I don’t write a sketch, I write a one-woman show.  I don’t write a song, I write and record an album.  I’m a “go big or go home” kind of gal.  Unfortunately, recently, I have done more of the “go home” part than the “go big” part.

However, this loaf of Wonderbread of mine is getting out of hand.  As insane as it sounds (especially when I say it in my head) I am considering doing another Triathlon sprint, because my gut seems to be suffering from unrequited love.  It loves me, but I don’t love it.  It isn’t taking the hint.  It seems to be sticking around.  It is annoying me. It vexes me.  I know it’s getting bad, when my always polite and awesome daughter says, “Mom, when was the last time you worked out? You need to work out.”

It doesn’t help at all that some women in their 40’s and 50’s write it off as normal aging. That belly fat is somehow part of normal life for a woman 45 and older… I don’t want to buy into that kind of thinking at all, because I would then have to admit that I am actually aging.  Also, I have a group of friends who are my age and in amazing shape, because they manage to get their asses out of bed in the morning; they do this thing called “Kick Butt Boot Camp” which doesn’t sound fun at all.  It sounds really, really hard and sweaty.  Regardless of how sadist it sounds, they blow that “female age” argument out of the water.  They work hard, their bodies look great.  They have this thing called “energy” and “a positive outlook” and “a clearly defined line where the ass ends and the leg begin.”  I really want that too, I just don’t want to sweat.